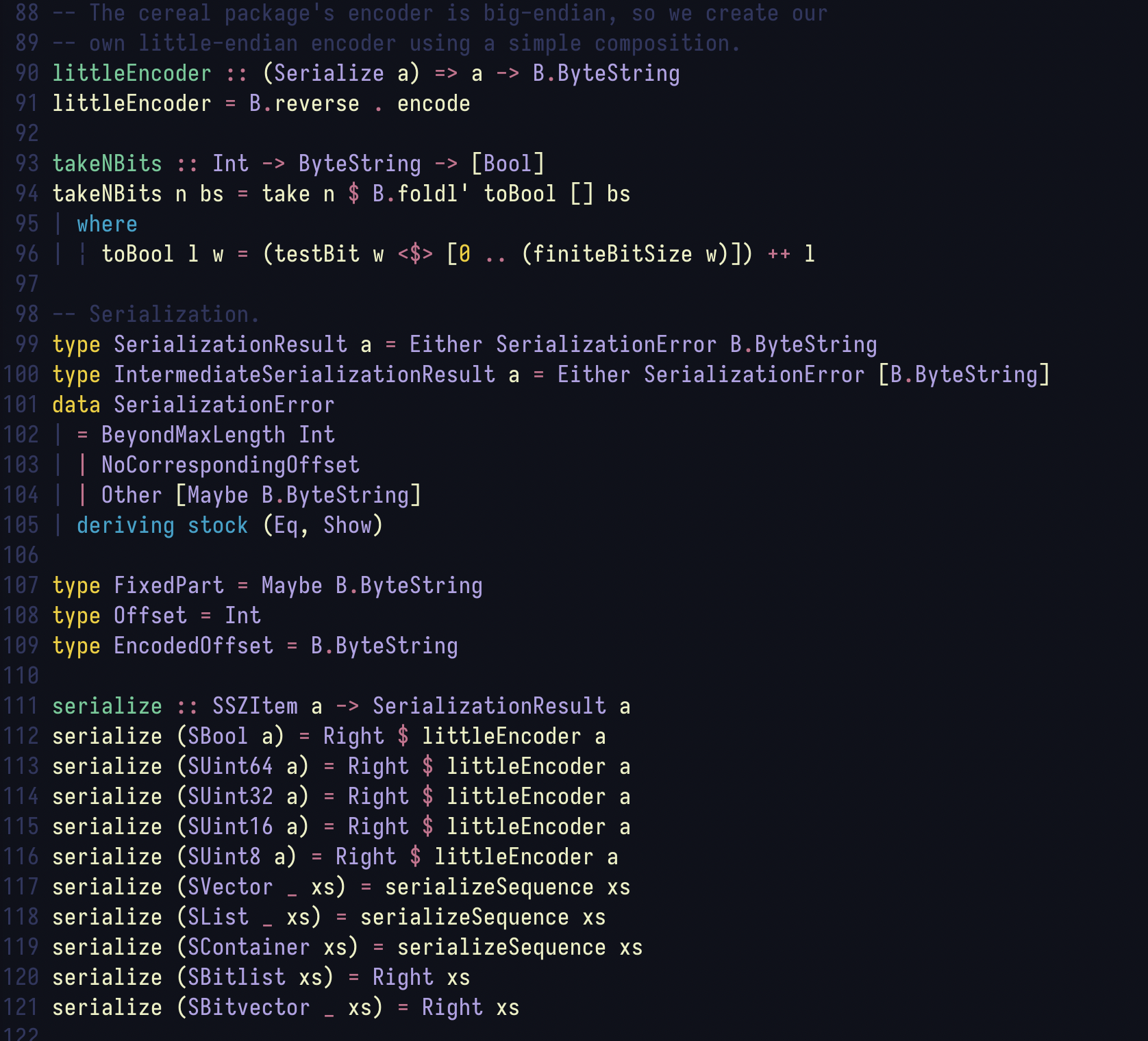 Today, modern blockchains tend to be built in the popular Rust and Go programming languages for the myriad benefits they offer. In particular, Rust has risen to popularity with empowering developers to write memory-safe software and great performance while Go has been a complementary choice for its powerful concurrency and networking primitives while being easy to write. In the domain of distributed systems engineering, writing software that is less bug-prone, more secure, and performant is what we tend to optimize for.

In each post, we'll introduce different concepts of functional programming and solve problems we run into when designing distributed systems. We'll be using the Haskell programming language in this series and will be introducing language constructs as we go along. There is no need to be a Haskell expert to understand the premise of each post.

What exactly is functional programming?

The most popular, modern languages today use imperative programming, which works as a series of procedures to accomplish a task. In Go, for example, the main() function of your program can do anything as an ordered procedure of computations.

In the example above, we need to read the program from top-to-bottom to fully understand what it is doing. Each function can make sense in isolation, mostly due to a descriptive name, but it is hard to reason about how they fit together until one reads this main() function in its entirety. Maybe you didn't want to save any block if any block in the batch failed to process. This is harder to spot if you had a more complex codebase, and can sneak up on you without the compiler protecting you from the bad intent of the code.

Functional programming (FP) flips this paradigm on its head. Instead, it follows a model of "declative programming" where we declare programs in terms of what things are rather than procedures to be done. FP in Haskell treats types, functions, and definitions as first-class citizens, and only allows deterministic, pure functions! In Haskell, all functions only depend on their input, cannot mutate data, and can only transform their inputs into new values in a deterministic manner.

To illustrate, here's how we could produce a list of N ones in an imperative language (Go):

Whereas in Haskell, we can an infinite list of ones in a simple way:

In Go, we have to define a procedure to get us a list of ones with a certain length, while in Haskell we can define a recursive type that tells you exactly what ones is. The best part is this definition is lazy because we aren't actually computing an infinite list (which would blow up our computer). Instead, we are merely defining what ones is, and then any other function could take any N numbers from this infinite list as desired. We can do the same for prime numbers, natural numbers, or any other infinite sequence using a functional, lazy definition.

In functional programming, function type signatures and their contents are enough to tell you what exactly something is, sometimes in a visually striking manner. Here is how we would implement the popular quicksort algorithm in this manner:

Instead of teling us a procedure for quicksorting with for-loops, we get a definition that visually depicts what is going on in this recursive algorithm.

I won't switch to Haskell – how will this help me as an engineer?

Thinking functionally extends beyond Haskell and helps us brainstorm new ways of designing software that is easier to maintain, test, and define. With fp, you can:

With fp, you can practice how to represent what you want your software to do in a more concise manner:

Imperative programming is a pretty natural way of mapping a set of instructions to "get things done" in software. Sometimes, procedures in imperative programs can be hundreds of lines of code, where we are accessing and updating databases, making HTTP calls, interacting with end-users, and more. That kind of code can be hard to read and hard to maintain. On top of that, a lot of imperative code is neither deterministic nor pure, as we often introduce side-effects that are unintended in our programs.

Let's say we want to write an imperative program that writes down a procedure for putting together a sandwich. We might do something like this:

In the code above, we mutate the sandwich variable along the way, and nothing stops us from doing something crazy such as making an HTTP request in the middle, or maybe sending an email when all we want is to build a sandwich! Even worse, if we do not make copies, and the sandwich is a pointer from an external input, we could be mutating a shared value and leaving it in an inconsistent state if any intermediate steps fail.

Thinking in types changes everything

Instead of saying how to build a sandwich, let's define what a sandwich is. In Haskell, we "think in types" and build our entire definitions around type sets we have full control over.

From here, instead of needing to define a procedure to build a sandwich as a series of steps, we simply define what a school lunch sandwich actually is in terms of its parts.

A school lunch above is simply a square-bun, pb&j sandwich! No need for an ordered mutation of sandwich data when we can simply declare what we want.

Functional programs tend to be comprised of many small functions that can be understood individually, whereas imperative programs tend to grow into mega-sized functions and procedures that make refactoring a pain. With imperative code, reasoning about the whole program can be difficult. This is because procedural order is key to imperative programs. Imperative code is easy to write but hard to read. When your code is being developed in a team environment, and a previous developer was the only one that understood all the logic of a critical, 1000-line function, you might be in trouble. Modifying even a single line of a procedure could cripple a program or introduce a serious bug, making it easier to grow technical debt.

In procedural code, your operations can have unintended side-effects, because functions will be executed top-down as a series of instructions without guarantees of determinism. In the middle of a for-loop, your code could access a database operation that fails while you have already updated another database record before, leaving you in an inconsistent state. Because data is mutable, your code can also suffer data-races, which are often patched up less-than-ideal tools.

In pure, functional programs there can be no data races because your data is immutable and each function is a deterministic transformation from inputs to outputs. That is, side-effects are not allowed.

No side-effects?! That seems impractical in the real world!

It sounds impossible to have a useful program that does not have side-effects, as we use these all the time in imperative programs to do valuable things. What alternative do we have in fp? It turns out we have really cool techniques to get effectful code using pure types and still maintain awesome guarantees which we'll cover in this series.

In imperative code, however, your software could be doing something like this:

Although the example above is contrived, it is harder to stop bad side-effects when your functions are thousands of lines long and have unclear naming. These kinds of dangerous side-effects cannot happen in a pure functional language such as Haskell without making it obvious to the developer, because programs are transformations of data type declarations rather than impure, ordered computation.

Over the course a blog series, we will be covering the major aspects of writing pure, functional code with real-world examples and without any fancy math to go with it. We'll be introducing hard concepts in terms of what they can do for us that other methods cannot, and wrap up the series with an analysis of how you can use this information especially if you plan to continue working with imperative codebases (I am a Go developer myself!). The series outline is as follows:

Stay tuned, as each post will be packed with content. I hope this piques your interest as much as it has been a joy for me to bring these ideas to developers that are not yet familiar with them.