One of cons of Go as a modern programming language is the lack of native options for making certain data structures immutable. That is, we often have to make key software design decisions in our application just to ensure certain data is immutable throughout the code's runtime, and it may not look pretty. At my company, Prysmatic Labs, we often encounter the problem where we need to maintain certain large data structures in-memory for performance reasons and we also need to perform one-off, local computations on such data. That is, we have very intensive read-heavy workloads in our application where we do not want to compromise data safety. 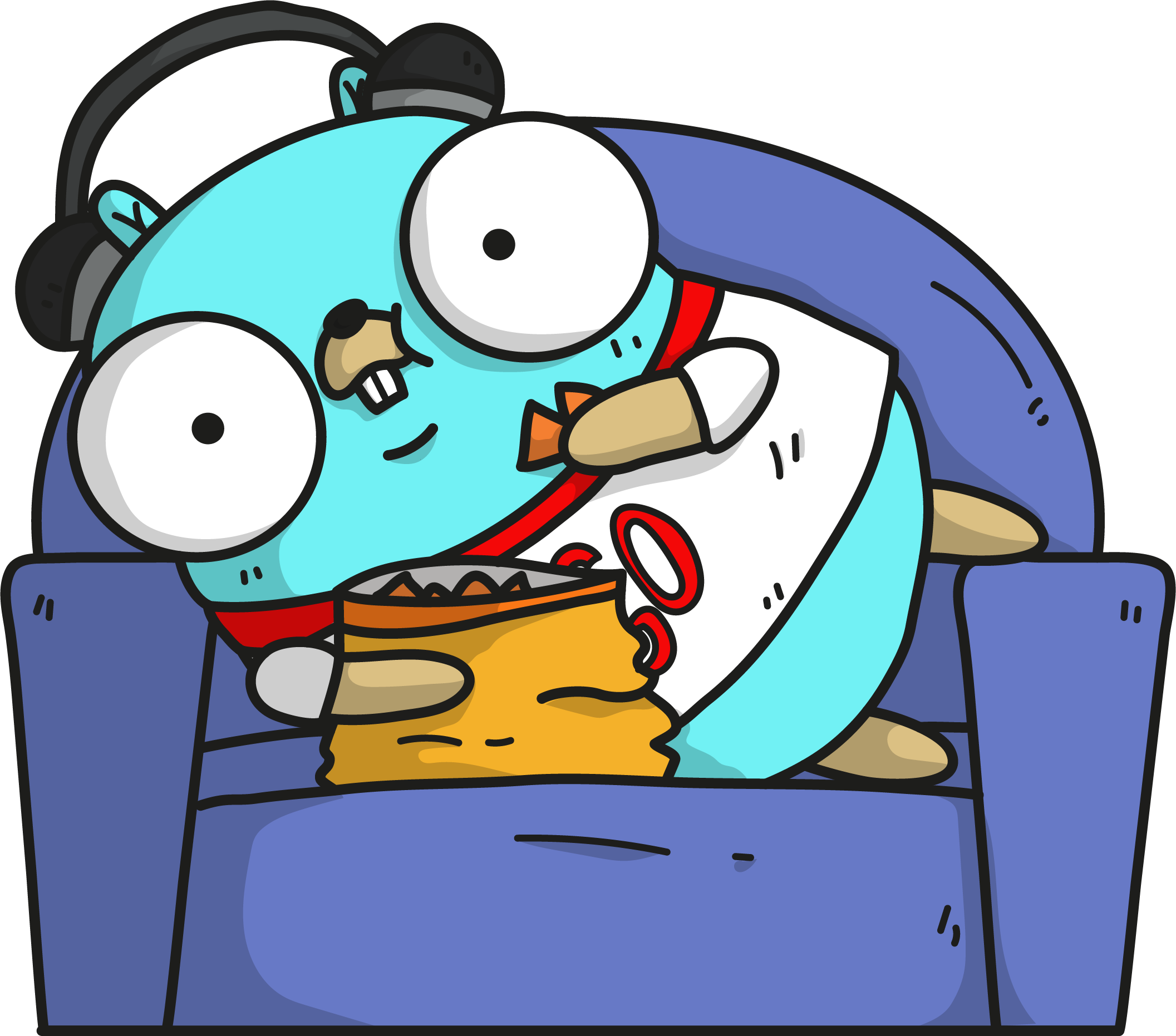 A concrete example of this is in the field of distributed systems, where servers typically maintain some global "state" which other computers on the network also maintain through a consensus algorithm. An example of this is Ethereum, a popular blockchain my team develops, which maintains a global state of user accounts, balances and tons of other critical information. These applications are state machines, which update their state through a state transition function: a pure function which takes in some data, the global state, and outputs a new global state in a deterministic fashion.

Let's give a basic example:

Even for such a simple computation, you still have to copy the entire state data structure! This is absolutely inefficient. You can probably get around this by not copying the state but instead just using the raw value of state.AccountBalances given you're not modifying it, you're just reading from it. However, this is dangerous! You don't want anyone to accidentally modify this value, so you want to be strict around data access and modification. A simple pattern in Go is to instead leverage unexported struct fields with getters and setters to prevent unwanted data mutation. For example, we can restructure our state to look like this:

This pattern will prevent anyone, including yourself, from accidentally mutating a field of this state in your application outside of its defined package. This approach works for most use-cases, however, if we have a function that needs every field of the state, such as the state transition function, we are not improving at all upon the naïve case of doing a full copy every single time. Moreover, your application might do a lot more frequent data reads than writes, or vice-versa. If you're calling the TotalBalance function thousands of times per second, this pattern has a trade-off compared to no copying at all.

Can we do better than always copying...? Let's take a look.

An advanced pattern for efficient memory usage while maintaining immutability guarantees is doing a copy on write approach. The general idea is that we have multiple copies of the state, but each of their inner fields point to a single, shared reference for all of them until one copy requires a mutation. A bit confusing, but let's take a look at an image to clear it up: 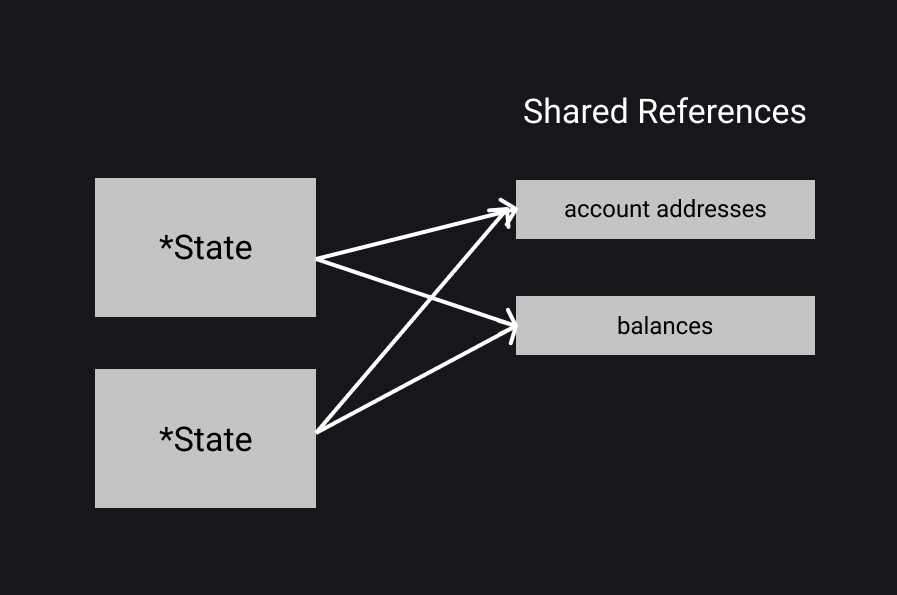 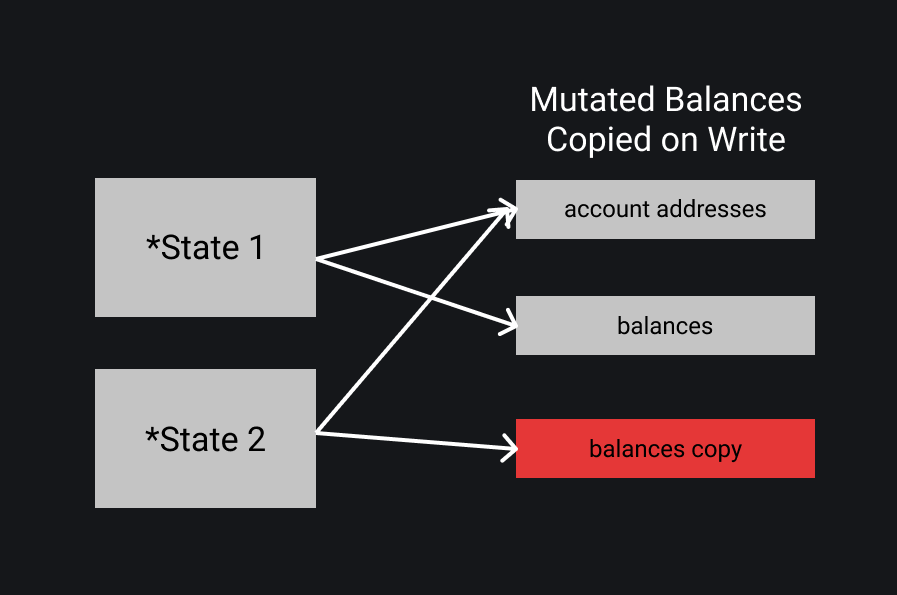 Let's take a look at how we would implement (2) in our examples, as it is a more flexible solution.

This basically tells the garbage collector what action to perform when destroying the object's allocated memory once it is no longer needed.

Let's try this out and prove it for ourselves with a unit test:

Let's see how much of a difference it actually makes compared to the naïve full copy approach with a benchmark:

You may wonder, why doesn't Go just support immutability of structs and other custom types as a default feature in the language? Dave Cheney, a prominent Go developer, has an excellent post on what would happen to Go as a language if items such as generics or immutability would be added as primitives. Go is an excellent language with numerous merits albeit with some clear problems at times. Nonetheless, it is still possible to follow sound software engineering principles to be able to get around Go's weaknesses and achieve good results.