We had a crazy week debugging one of the trickiest issues we've seen in our software. This post showcases how we went down a rabbit hole of information only to conclude a resolution was far easier than we thought.

It must be something about how our application interacts with the operating system's memory via syscalls, right?

Embedded key-value stores such as BoltDB are so powerful because they contain all the data you want, persisted in a single file. These databases use an operating system call named mmap which is able to map the contents of a file, even very large ones, to your computer's memory directly, allowing for lightning-fast random access to its data. Popular file-based databases such as bolt and sqlite use mmap extensively.

Mmap as a system call is a very powerful tool. MMap is arguably the reason why embedded key-value stores can be so darn performant, even in programming languages that may not be the known for speed. The problem with mmap is that of course, you need to know how much to initially allocate, and dynamically grow that allocation to fit your software's needs. We realized that bolt db's mmap defaults were actually too conservative. 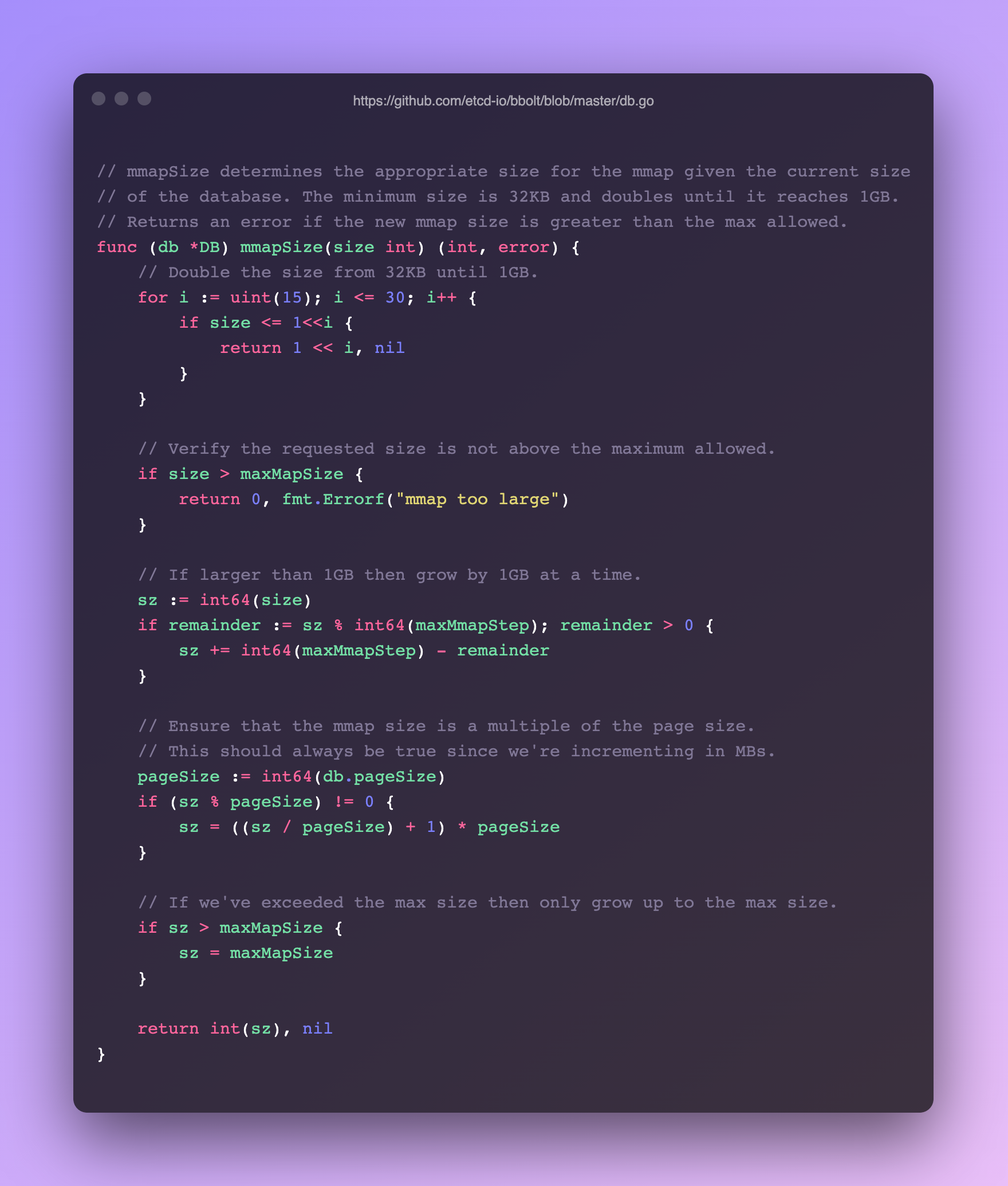 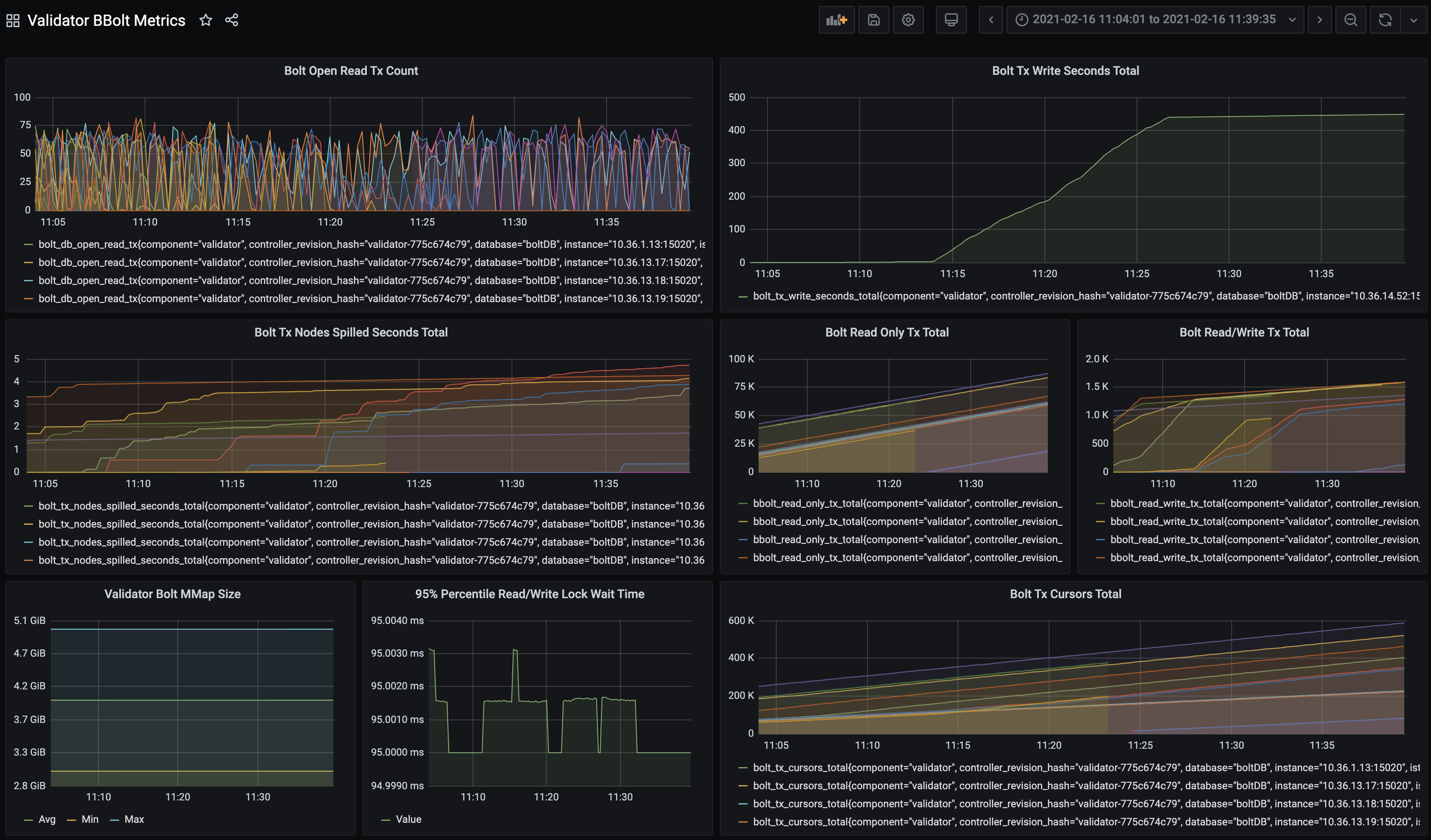 Aha, it's clear that iterating over all keys in a particular db bucket is taking up a big portion of the flames, but is it really that bad? Can bolt really not handle iterating over a bucket this way?

We began tweaking parameters, modifying things such as bucket-level and transaction-level optimizations, but we felt like we were still shooting in the dark here. That's when we went back to the basics and looked at the assumptions of our algorithm.

You might think this is terrible engineering and a lack of foresight, however, the reason we went with this relatively naive approach in the first place was because there is a known upper bound to n of 54000. We were able to prove, with a benchmark, that 2000 concurrent runs of this algorithm at that upper bound take a total of 300ms to complete, which is within reason, and with minimal resource footprint. We also didn't anticipate reaching that upper bound anytime soon. So why, then, were we having problems? Was our benchmark flawed? Were we missing something?

We decided to go back to principles of software design. My teammate, Preston Van Loon asked the question: "what if we just change our database schema?". First of all, we have a precondition that the keys in the database bucket are monotonically increasing unsigned integers, that is, they are ordered from 0 to worst-case, 54000. Moreover, each key value pair is cheap to store, only 16 bytes total. If we notice above in our pseudocode, we have two conditions we care about:

Instead of iterating over all keys in the bucket, let's handle each of these conditions separately.

Notice that we can actually exit early here if we find a key that is less than or equal to x. Why? Since the keys are guaranteed to be monotonically increasing and ordered, if we ever find a key <= x, it if impossible we'll ever meet the conditional. Since this bucket in the database only grows via appending to it greater values than before, we can actually iterate over this bucket in reverse. So we can rewrite as:

In ideal conditions, we will exit early very quickly in this loop, giving us a "best-case" performance of Ω(1), which is amazing! but how can we perform our other check, for surrounded? Well, we can actually duplicate the same bucket, but in reverse. Instead of key=>value, we store value=>key, and perform the same check. Mathematically, it allows us to achieve the same results. Since data storage is cheap but performance is non-negotiable, this approach seemed like the optimal trade-off we had been looking for since the beginning.

When you are neck deep into a problem, thinking the solution lies deep in some freak behavior of your operating system, maybe it's time to take a step back and just look at the code you wrote.